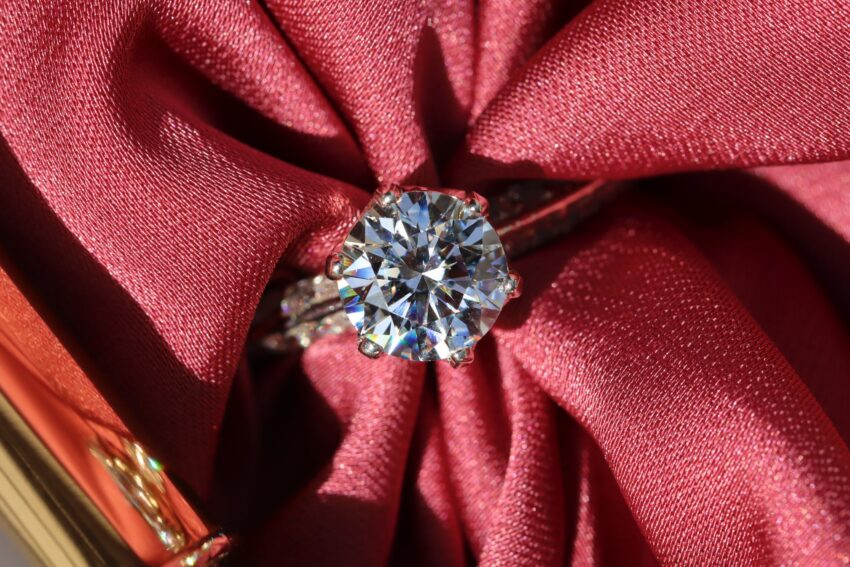 I once heard someone tell this amazing story that happened about thirty years ago in Jerusalem. A young Jewish couple had gotten engaged and it was customary on the groom’s side that his wealthy grandmother would buy the engagement rings for all of the family’s brides.

The young bride was a bit embarrassed by the large size of the diamond and she found it uncomfortable to wear since it weighed heavily on her finger. However, her parents encouraged her to get used to it and not to hurt anyone’s feelings.

The couple got married and a few months later they were invited to a family event at the home of one of the groom’s cousins. His cousin gasped when she noticed that the young bride wasn’t wearing her engagement ring.

The cousin shrieked and in a loud voice said, “Where is your ring?”

Suddenly there was a lot of commotion and the young bride explained that she had unfortunately misplaced the ring but was confident that it would turn up over the next few days. Days turn into weeks, weeks into months and the ring was still missing. In the meantime, the bride was too embarrassed and ashamed to go out to any other family events because of all the criticism about how negligent she was in losing such an expensive ring.

A few days later, her sweet husband apologized profusely to her. “You see my darling wife, it was all my fault that you had to endure my family’s ridicule about losing your engagement ring. He went on, when I finally remembered to pick up my wedding suit from the drycleaners after all this time, I hadn’t counted on finding your diamond engagement ring in one of the pockets of my suit. You must have given it to me to carry for you and I completely forgot about it.”

The wife accepted her husband’s apology and was so happy it was found. However, she demanded that he tell everyone from his family, especially his grandmother how it was his negligence, and not hers, which he happily agreed to.

Fifteen years and seven children later, shortly after his grandmother’s passing, the wife requested permission from her husband to trade in the old diamond ring for a new one.

She went to his grandma’s favorite jewelry store and did window shopping.

Approached by the owner, she removed her ring and showed it to him asking him to appraise it, and inquired if he would be willing to buy it back so that she could use the money towards a ring that was more her style. The Jeweler examined the ring and relayed to her that the ring was very nice and that it was worth a lot of money however, he questioned her for wanting him to buy it back since the ring was not from his shop.

The wife surprised by his words reminded the Jeweler who her husband’s grandmother was, and how she had purchased all of the family’s jewelry from him for the past thirty years. The Jeweler smiled and surely remembered the lovely wealthy client, however, he insisted that this particular ring was not from his shop as all of his jewelry had a type of hidden signature that this piece was lacking. However, he would be willing to pay a good sum of money for the heavy diamond ring.

The woman took the ring back and told the Jeweler that she needed a few days to consider the offer.

She went home and looked for the original certificate of the diamond ring. Buried under years of important documents she finally found what she was searching for. Just as she had suspected, the date was six months after she was already married. Her husband had felt so bad for her for not only losing her diamond ring but for the constant criticism of losing it, that he went out and purchased an exact replica and took all the blame for misplacing the ring when in fact she was the one who had truly lost his grandmother’s gift of the heavy diamond ring.

She no longer had any desire to sell the ring. Her husband’s sacrifice and utmost devotion to making her happy was the only thing she saw when looking at the ring.

This week’s Parsha, Ki Teitzei (Seventy-four of the Torah’s 613 commandments (mitzvot) are in the Parshah of Ki Teitzei) speaks about what happens when a Jewish soldier goes off to war and finds an attractive female captive and wants to marry her. The Torah goes on to explain under what process and conditions he may marry her.

Chasidus explains that the Torah understands the natural desire for something new. Something new brings with it an excitement that the human psyche is constantly searching for. Knowing that this particular new thing may very well not be healthy. The soldier must follow a process that will remove this excitement for this captive by having him wait thirty days before being allowed to marry her. Then he will be able to make a well-informed decision and not an emotional one.

In relationships, it is important to not allow your connections to fall into a dull routine. The worst thing one can do is get into a type of lifeless, passive relationship with a spouse. That is why one should be constantly working hard to learn new things about their spouse and to nurture, expand and dedicate oneself to enriching the relationship in order to make it everlasting and perpetual love.

This is also the main point of Rosh Hashanah. It is a time for introspection and a time to examine one’s relationship with Hashem and to make a renewed commitment to taking the relationship to a higher plateau. A new commitment that will lead to a higher level of devotion and Dvekus (attachment.) It will also create an unbreakable bond that didn’t exist until now.